How can we ensure a just transition to the green economy? 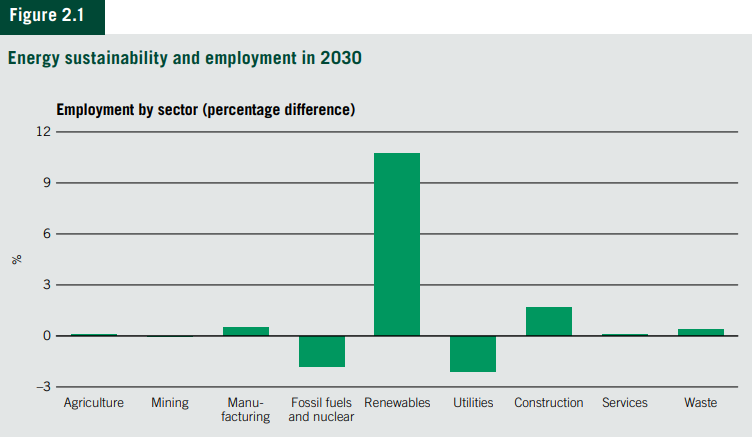 The global shift to a green economy could create 18 million jobs, with the potential to provide high-quality employment and livelihoods around the world.

But what about the people and communities whose livelihoods, right now, depend on the fossil fuel or other high-carbon sectors?

An estimated 6 million jobs in coal-powered electricity, petroleum extraction and other sectors could disappear by 2030. Many of the new green jobs will require different skills than previous energy jobs or will be in new locations.

If this complex transition is not managed in a just and equitable way, it could create unnecessary hardship for affected workers and their communities, and even lead to pushback that could slow the implementation of crucial climate policies.

WRI’s new Just Transition and Equitable Climate Action Resource Center highlights 31 snapshots of initiatives around the world that can provide lessons and insights to ensure that the transition to a zero-carbon economy benefits workers and communities.

Done well, just transition requires dialogue and proactive planning among workers, employers, governments, communities and civil society. This ensures that people who currently depend on fossil fuel-intensive activities receive the support, social protection and investments they need to thrive in a zero-carbon future, and that the costs and benefits of climate action are distributed equitably.

The global shift to a green economy could create 18 million jobs.

It also means making sure that important revenue streams that local governments receive from fossil fuel production will be replaced in equitable ways, and that companies are positioned to create decent jobs and economic growth while contributing to climate action.

The examples profiled on the site show that just, equitable transitions are already happening around the world. They can offer inspiration for other cities, states and countries.

Among other lessons, these snapshots show us four things:

1. A just transition is possible.

This could have led to widespread unemployment. Instead, the Ruhr region’s average annual economic growth between 1957 and 2000 was a modest but positive 1.3%, with relatively low unemployment rates. By the mid-2000s, 100,000 workers were employed in research and development of environmental technologies.

The region’s economic success was built on decades of proactive planning that included extensive social dialogue with unions, widespread infrastructure investments for transport, and workforce support including early retirement and training. Now, the Ruhr has a high concentration of universities. Plus, it’s known for converting former industrial areas into tourism sites and modern housing.

That success in proactive planning stands in stark contrast to what happened in the coal-mining town of Wałbrzych, Poland, where abrupt closures of nearly all local mines due to economic difficulties in the mid-1990s led to 40% unemployment. It was decades before efforts to restore the economy, including a business development agency and special economic zone (INVEST-PARK), were put in place. The employment generated from the INVEST-PARK initiative is estimated at between 15,000-53,500 jobs as of 2019-2020.

A just transition is impossible unless everyone affected by the change — including workers, employers and government officials — have a chance to advocate for their own interests and fully participate in the planning process.

In Spain, a Just Transition Strategy, created in 2019, outlines a structured, participatory process to protect fossil fuel workers from unemployment and plan for the future of coal regions. As of November 2020, more than 1,500 people had participated in conversations and negotiations that will inform Just Transition Agreements across 14 regions.

While most of the focus in Spain has been on coal mines, planned closures of coal-fired thermal power plants will eliminate 2,300 jobs, according to local union data. In April 2020, an agreement was reached between two government ministries, two trade unions and the power plants’ owners. The agreement includes investing in new business opportunities that build on the specific strengths of affected regions and facilitating training of power plant workers so they can be re-employed in those new opportunities.

From workers in local businesses that sell products and services to fossil fuel companies to the grocery stores clerks and café baristas who serve that sector’s workers and their families, people across the community are impacted when a major local industry closes. In addition, taxes paid by fossil fuel-intensive companies and their workers often make up a significant share of public budgets, funding essential services like road maintenance and schools. 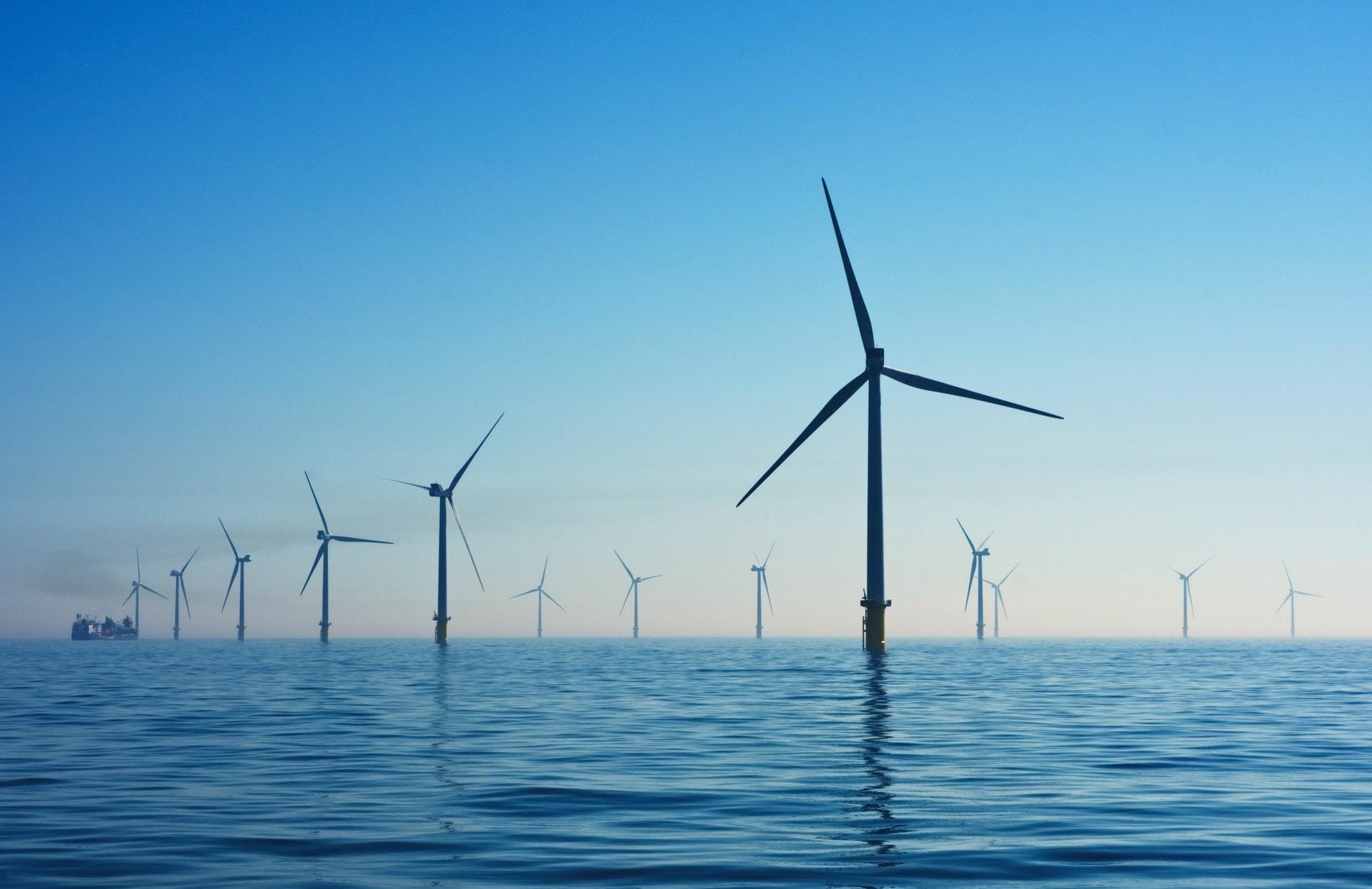 Wind farms provide a source of green energy, but a just transition means considering communities in the areas where they are being built.

By the time the Huntley coal power plant in Tonawanda, New York closed after an 11-year phase-out in 2016, tax revenue for the town, county and school district had dropped by $6.2 million. Three public schools were shuttered.

This challenge brought together a diverse coalition that successfully lobbied the New York state government to set up the country’s first Electric Generation Facility Cessation Mitigation Fund in 2016, through which the state government replaces up to 80% of lost local tax revenue in cases like Tonawanda’s. It also supported a comprehensive planning process for Tonawanda’s economic future.

4. Large clean energy projects are not always equitable by default

Renewable energy developments like solar and wind farms are important in the transition away from fossil fuels, but they often require large amounts of resources, including big swaths of land. In these cases, it’s critical that the land is acquired through a fair process that respects the rights of marginalized communities such as poor or indigenous communities.

In Morocco, an ambitious 7,143-acre, 582-megawatt solar facility known as the Noor Power Station was developed with measures in place to generate economic benefits for the nearby rural, lower-income communities. These included proactive community engagement efforts, a social development plan to improve infrastructure and services, and a requirement that the Noor station purchase 30% of its raw material, basic equipment and manufacturing components from local businesses. The types of jobs that are most accessible for local residents — lower-skilled positions — made up 46% of construction jobs and 21% of operational jobs.

In a major step, nine cities and more than 70 organizations in 10 different sectors have come together to build further momentum for a new multi-year initiative: Net Zero Carbon Cities.

Together with the Forum, they have created a vision for the future and launched a new framework to help cities rethink urban ecosystems, ensuring that they are greener, efficient, resilient, circular and more equitable. 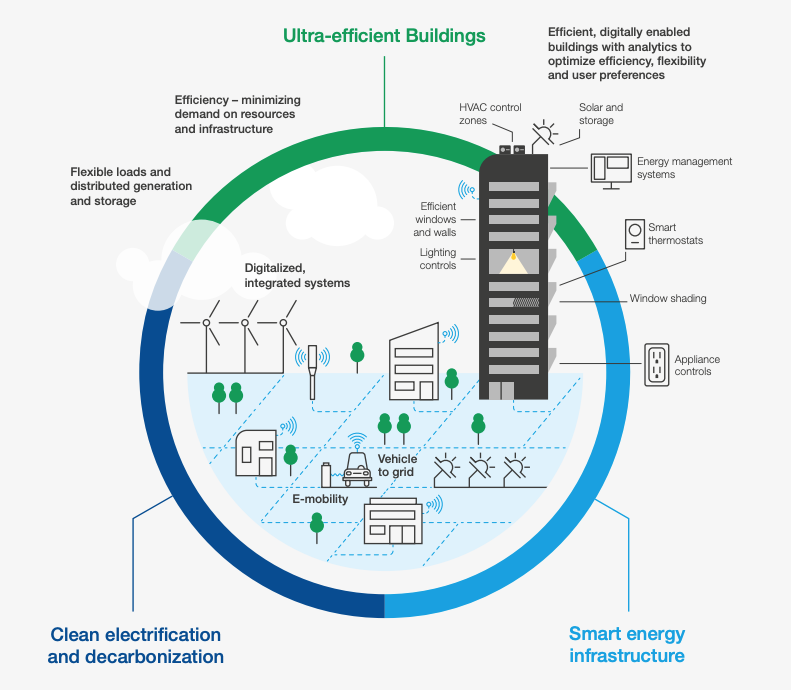 From policy-makers to businesses, city administrators, civil society and the financial sector, the World Economic Forum is convening a range of stakeholders with a role to play if global cities have a chance of reaching the net-zero carbon goal by 2030.

Companies can join the integrated approach to help shape city ecosystems to become net zero carbon by joining a Forum platform. Find out more in our impact story.

Past experiences are key to designing a just transition

A zero-carbon world can be equitable if it is intentionally designed to be. WRI’s Just Transition and Equitable Climate Action Resource Center offers examples of how the move toward zero-carbon economies can benefit workers and communities; we will add more examples to this website as just transition efforts grow.

The time to design just transitions is now. Countries are currently submitting enhanced climate commitments under the Paris Agreement in the lead-up to the COP26 climate summit. Stimulus packages are planned to help economies recover from the coronavirus pandemic. As they do so, there is a window of opportunity to accelerate the transition away from fossil fuels and build a zero-carbon future that benefits everyone.