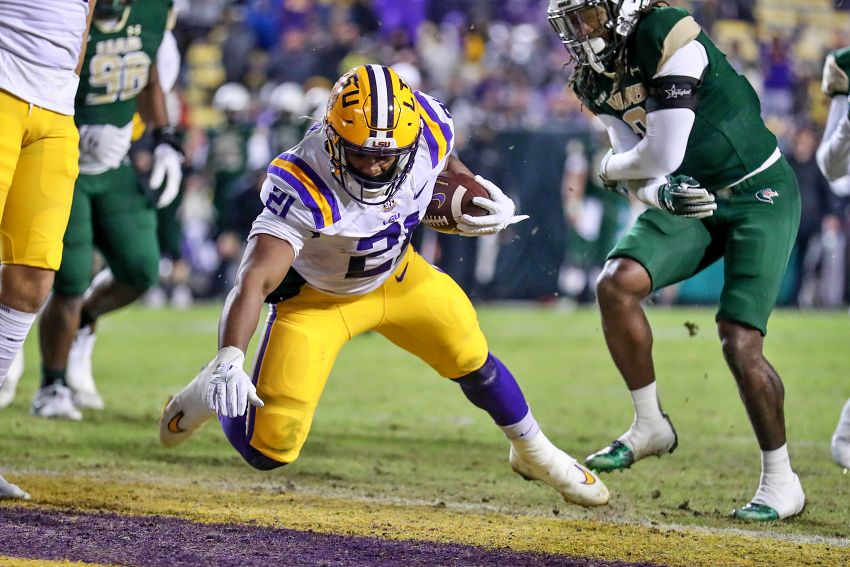 The stadium appeared half empty. The weather was awful raining throughout and cold. The opponent was not attractive and it was the weekend before Thanksgiving, with many students having already departed campus for the week. On top of that, it was a late start at 8 p.m.

There was always the concern about a letdown, about not being motivated against an inferior non-conference opponent, with an Interim coach, sandwiched in between SEC games.

The game notes reminded us that UAB beat LSU, 13-10, on September 23, 2000 at Tiger Stadium in Nick Saban’s first year on the job in Baton Rouge.

There was bad history. It was a night where LSU had to overcome distractions, focus and take care of business.

Rather than focusing on bad history, the Tigers are focused on making history.

LSU was up to the challenge Saturday night in securing a 41-10 win.

The negatives in the contest were clear. LSU’s special teams play continues to be a disaster.

The Tigers gave up a huge kickoff return to set up a UAB touchdown, committed a personal foul on a punt return which cost LSU great field position and missed an extra point.

John Emery continues his troubling trend of a lack of ball security, fumbling away a pair of promising drives in UAB territory.

At this point, Brian Kelly simply cannot trust him. Emery had to take more carries in this game with Josh Williams sitting out and Armoni Goodwin also injured. The senior running back probably lost trust in the process.

Of course, the positives were also clear and far outweighed the negatives.

LSU had scored touchdowns on its first two possessions and the Tigers were on their way to a third score in as many possessions when Emery fumbled it away.

Then, they drove 56 yards in four plays and Cain scored his third touchdown and LSU was up 28-10 at halftime.

Jayden Daniels accounted for 307 yards passing and running in the half as LSU amassed 355 yards.

LSU was a perfect 6 of 6 on third down conversions in the half.

The LSU defense started off a bit shaky but Matt House made adjustments as he always does, and the play of the unit picked up dramatically.

The Tigers drove 57 yards in six plays with Daniels scoring with 6:50 to play in the third quarter to give LSU a 34-10 lead.

Daniels finished it off with a 5-yard touchdown pass to Brian Thomas to cap a nine play, 86-yard drive to make it 41-10 with 9:46 to play in the game.

LSU never trailed. The outcome was never in doubt.

There was no letdown on Senior Night.

It was Cain’s night, with three touchdowns.

It was a very good night for Malik Nabers with seven catches for 129 yards.

Kayshon Boutte did not play and LSU did not miss him.

Garrett Nussmeier entered the game with just over 8:30 to play in the game.

LSU finished with 565 yards of offense and just 48 yards rushing to the Blazers.

So now it is on to College Station.

Texas A&M snapped a losing streak with an unimpressive victory over UMass.

It has been a massively disappointing season for the Aggies but you know they will show up loaded for tiger next Saturday.

LSU will have to bring it.

I picked LSU to win eight games prior to the start of the season, expressing confidence in Kelly and his staff, in the few outstanding returning players and in solid additions through the transfer portal and in recruiting.

Many people expressed to me via e-mail and on my radio shows that I was too ambitious. Some even postured that I was nuts, that I was wrong.

It turns out I was wrong.

I underestimated these Tigers.

It is now nine wins and counting as LSU is mounting a challenge to actually make the College Football Playoff, an amazing, mind-boggling fact for a program that had 39 scholarship players when Kelly arrived.

Kelly arrived. LSU has arrived, earlier, perhaps much earlier than anyone anticipated.