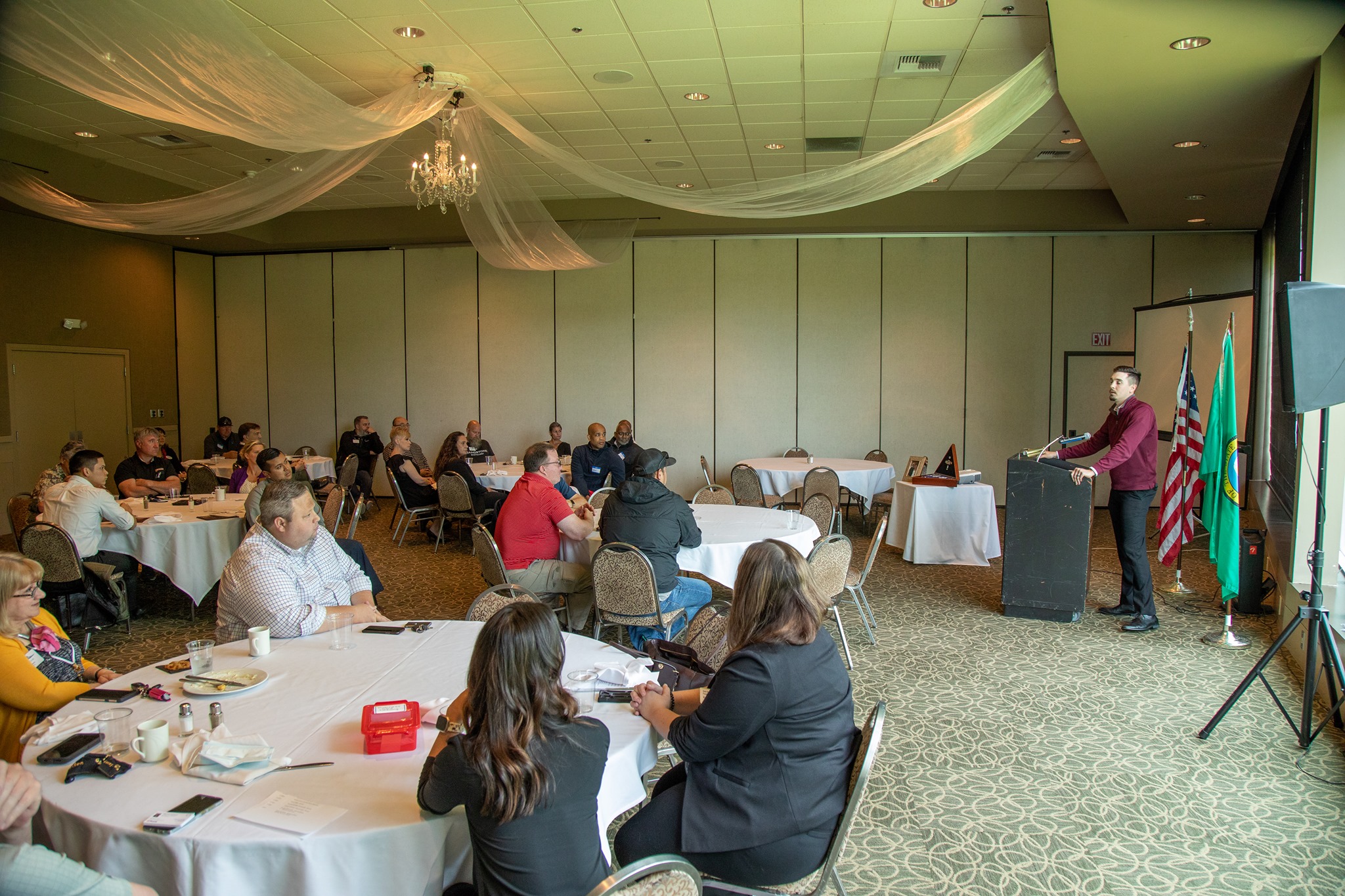 Every meeting includes time for attendees to share about their business, a guest speaker and a business spotlight. Photo credit: Clair Ferris

Business networking events can sometimes feel like speed dating. Participants often have just 30 seconds to introduce themselves and their business before it’s time to move on to the rest of the agenda. But at South Sound Connections, an event hosted by the Lacey South Sound Chamber of Commerce, the vibe is intentionally friendly and relaxed, with more time dedicated to small group conversation.

“You still get to meet everyone in the room,” says Executive Director Blake Knoblauch, “but then we go into lunch and you’re able to sit down at a table with six individuals and share about your business and what a good referral looks like to you. It’s a wonderful opportunity to make those personal relationships.”

The group meets on the fourth Wednesday of every month and any business can attend, regardless of whether they are Lacey Chamber members. Each meeting includes time for members to mingle informally followed by Table Talk, the session Knoblauch describes in which the group breaks up into smaller units and each attendee gets three minutes to share about his or her business.

One advantage of smaller groups is getting to know people on a more than surface level, according to Mike Jameson, a chamber board member and mortgage loan officer with U.S. Bank. “People can get out of their shell and really talk about their companies and themselves,” he explains. “When other entrepreneurs get to know you, they’re more inclined to do business with you.” Jameson co-facilitates the group with fellow Chamber members Tiana Klienhoff, owner of Welcome Home Rentals, and Sarah Daniels, an inspector with CCS Home Inspections.

Daniels notices that a different clientele attends South Sound Connections relative to other groups. “One thing that separates this group from other networking events is that it’s primarily the business owners and not just their marketing representatives who attend it,” she notes. “It gives people a good insight into what their business values are.” 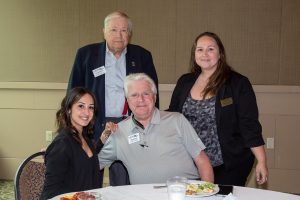 Every meeting includes time for attendees to share about their business, a guest speaker and a business spotlight. Photo credit: Clair Ferris

Each meeting also includes an educational component, with speakers from different aspects of the community such as law enforcement, economic development and the nonprofit sector sharing updates. Within the past year, they have included the City of Lacey’s Director of Community Development Rick Walk, City Manager Scott Spence, American Cancer Society Community Development Manager Nicole Woolsey and Lacey’s new Chief of Police Robert ‘Bob’ Almada. “The police chief gave a presentation about the new legislation that’s coming and things we can expect to see with police officers moving forward,” Daniels says.

Then comes a business spotlight, an opportunity for a participating business owner or representative to share information about their company over a six to seven-minute period. “They can dive more into what they do, who they are and their families,” Jameson explains. “Getting to know each other personally helps the whole group grow.”

Finally, any attendee can acknowledge a business within the group that they recently used for a product or service. “It’s amazing how many people stand up for the shout-outs,” says Jamieson. “It makes a difference because people hear that and then they tend to use that person, too. It self-propels.” 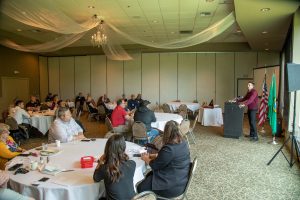 The group meets on the fourth Wednesday of the month and non-chamber members are invited to join. Photo credit: Clair Ferris

Referrals are an important part of any small business, and South Sound Connections delivers them organically. Some networking groups insist on a certain number of transactions between members or a quota for bringing potential new members to meetings, but this meeting is relatively low pressure. “The whole point is increasing your business-to-business contacts,” says Knoblauch, “so referrals will naturally occur.”

In his case, Knoblauch ended up using a chiropractor who attends the meetings. He’d never considered using one before, but after making an appointment for himself, he also made one for his father who was having back issues. “It worked out that the chiropractor was able to help him with his back problems, and that was a result of South Sound Connections,” says Knoblauch.

Daniels finds the group a useful place to connect with realtors. “Many of them don’t do a lot of networking so when they do drop in, you only have a couple of minutes to share your story and figure out what interests you have in common,” she says. “That’s something you can do with the table time we have at South Sound Connections.”

It’s a proven fact that people do business with who they know. South Sound Connections offers a way for business owners to engage with potential customers and create long lasting relationships.